I’m almost to the bottom of my last jar of dandelion salve, which I made in late June. I’ve been using it as a hand and body lotion and have found it to be both soft and luxurious. Because dandelion season is long past, and I did not dry any flowers for future use, I had to brainstorm and search for what I could use from my garden or from the forest to make my next batch of salve.

I settled on starting with making a rose hip salve, since they are ready for harvesting and using in mid-fall, after the first frost. Rose hips are not only nutrient-rich, but they also smell amazing! I have one large rose bush in the yard, but it did not produce many blooms after its mid-summer pruning, so there are very few hips to use. I decided instead to head out into one of the many large parks near my home where there is an abundance of wild roses.

I chose a bright sunny day, put on my sturdy hiking boots, grabbed a paper bag and scissors and went foraging. The walk itself was beautiful, and I found an abundance of wild rose bushes with hips in various stages. I chose rose hips that hadn’t started to dry out and decay yet (decaying rose hips look like deer droppings on a branch).

When foraging for rose petals or rose hips, wear long sleeves, long sturdy pants like jeans, and gloves. The thorns on many rose bushes are quite sharp. If you are new to foraging and wildcrafting, I recommend reading my post on the basics of wildcrafting before starting out.

After washing and sorting the rose hips, I ended up with about one and a quarter cups. I found many recipes online for infusing oil with rose hips and chose the simplest one. It called for using a ratio of 2 to 1, oil to rose hips. I chose a blend of coconut, sweet almond, and jojoba oils, with a splash of olive oil for additional richness. If I were making it for use on my face, I would leave out the coconut oil, as it can be comedogenic and clog pores. If you are like me and are prone to breakouts, avoid coconut oil in facial products that you buy or make.

I don’t have a double boiler, so I improvised by filling a large pot with a steaming insert to just above the steamer bottom. Then I put a smaller pot inside the steaming insert (see picture). I poured out the washed, trimmed rose hips into the small pot and then added the oils. I let the water in the pot come to a boil, then reduced it to a gentle simmer. After putting the small pot inside the larger pot, I used a meat thermometer to periodically monitor the temperature of the oil infusion. I let the rose hips infuse for four to five hours, then strained the oil through cheesecloth over a fine metal mesh strainer. For a more purified oil, you can use fine muslin cloth instead of cheesecloth.

I have heard of people using a slow cooker or even a yogurt maker for infusing oils, but I prefer to have a dedicated pot just for infusing oils and leave my other kitchen appliances for cooking food.

If you give this a try, please let me know how it went in the comments. I will post the instructions I follow for using infused oils to make basics salves in an upcoming blog post. Note that if you are not able to obtain fresh rose hips, you can use dried, but you do not need to do a hot infusion. Use the same ratio of oil to hips, and let it infuse in a mason jar for a few weeks in a dark cool place before straining.

The Basics of Wildcrafting

Wildcrafting is gathering plant matter (flowers, leaves, roots, seeds, fruits, nuts) from a relatively untouched source (The Wilds), such as a park or forested area, or even your backyard if you do not use any sprays to treat your grass or garden, with the intent of using it for food, natural medicine or beauty treatments. It can be a simple as harvesting fresh greens for a salad or flowers and herbs for a vinegar infusion, or as complicated as finding ingredients for a facial moisturizer or cough syrup. For some, wildcrafting and foraging are two words to describe the same thing, but for me, the difference is that foraging refers to the act of gathering food or medicinal plants from uncultivated areas, whereas wildcrafting refers to using those foraged plants for use in making something else. 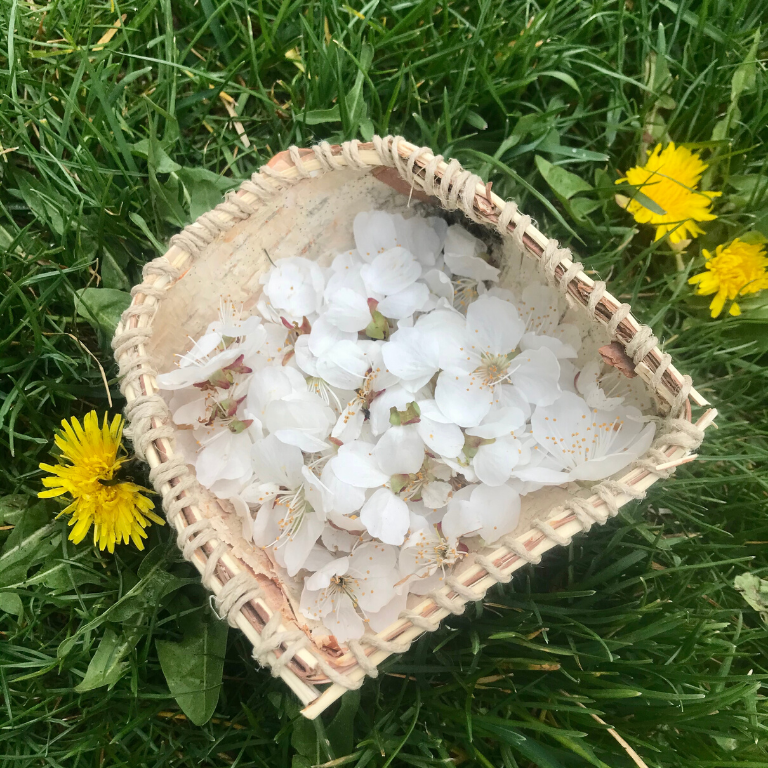 It is important to be respectful of the plants you are harvesting from and the environment you find them in. A wise young herbalist taught me to always follow the rule of three, but I think it should really be the rule of four. Quite simply, do not take more than 1/4 of the plant matter that is available. Leave the rest for 1) animals and insects, 2) for natural reseeding, and 3) for other foragers. Just because you stumble upon a perfect patch of edible mushrooms does not mean you should pick them all! Also, be respectful of landowners by always asking for permission before foraging on private land. Try to minimize damage to other plants when seeking out a specific crop. These instructions might seem like common sense, especially considering that most people who are interested in wildcrafting are likely already respectful of the environment, but I really want to encourage others to be mindful of harvesting in a sustainable manner.

Start with Something Simple

I’ll be honest, I was very intimidated when I first started thinking about wildcrafting. I thought I didn’t have enough plant knowledge. I thought I didn’t have the skills necessary. I thought I would need special equipment. But I was wrong. Once you know what plant you are looking for, wildcrafting can be surprisingly easy. You do need some knowledge of local plants, so start with something simple to find and correctly identify. Do not harvest something if you are unsure, especially potentially poisonous plants like mushrooms.

My first foray into wildcrafting was a dandelion salve. I chose dandelions because it was the peak season for them (April to May in my area of the world), and there was an overabundance in our yard. I do recommend starting out with a plant that you are confident in identifying. I made an infused oil with partially dehydrated dandelion flowers, and then used that oil as a base for my salve. It was much easier than I expected, and I was thrilled with the results.

Tips for Finding Recipes and Tutorials

I highly recommend doing an hour or more of internet research before starting out. First, choose what you want to make. Next, find instructions on a few different sites that seem relatively easy to follow. If the instructions call for ingredients that you can’t obtain, or tools you don’t have, try another site. For example, if the infusing instructions involve using a slow cooker and they don’t give instructions for using an alternate heating method like a double boiler, don’t despair! Someone, somewhere has done almost the same thing, without the use of the tool that you don’t have. If the recipe calls for an ingredient that is difficult for you to obtain, search for other recipes and find out if there are alternative ingredients that you can use. For example, most oil infusions will work well with a variety of oils. I personally like to use coconut, sweet almond, and jojoba oils in my infusions, but other people might prefer grape seed oil or olive oil in place of one or all of those.

In my tutorials, I like to give a few options for ingredients and tools, to make it more accessible for those who are just starting out. My goal is to help others do what I do, with minimal obstacles and frustration. I want you to feel the confidence and satisfaction that comes with learning a new skill and making something from scratch.

Stay tuned to the blog for my easy-to-follow tutorials on making dandelion infused oil and salve and lilac infused honey.