I’m almost to the bottom of my last jar of dandelion salve, which I made in late June. I’ve been using it as a hand and body lotion and have found it to be both soft and luxurious. Because dandelion season is long past, and I did not dry any flowers for future use, I had to brainstorm and search for what I could use from my garden or from the forest to make my next batch of salve.

I settled on starting with making a rose hip salve, since they are ready for harvesting and using in mid-fall, after the first frost. Rose hips are not only nutrient-rich, but they also smell amazing! I have one large rose bush in the yard, but it did not produce many blooms after its mid-summer pruning, so there are very few hips to use. I decided instead to head out into one of the many large parks near my home where there is an abundance of wild roses.

I chose a bright sunny day, put on my sturdy hiking boots, grabbed a paper bag and scissors and went foraging. The walk itself was beautiful, and I found an abundance of wild rose bushes with hips in various stages. I chose rose hips that hadn’t started to dry out and decay yet (decaying rose hips look like deer droppings on a branch).

When foraging for rose petals or rose hips, wear long sleeves, long sturdy pants like jeans, and gloves. The thorns on many rose bushes are quite sharp. If you are new to foraging and wildcrafting, I recommend reading my post on the basics of wildcrafting before starting out.

After washing and sorting the rose hips, I ended up with about one and a quarter cups. I found many recipes online for infusing oil with rose hips and chose the simplest one. It called for using a ratio of 2 to 1, oil to rose hips. I chose a blend of coconut, sweet almond, and jojoba oils, with a splash of olive oil for additional richness. If I were making it for use on my face, I would leave out the coconut oil, as it can be comedogenic and clog pores. If you are like me and are prone to breakouts, avoid coconut oil in facial products that you buy or make.

I don’t have a double boiler, so I improvised by filling a large pot with a steaming insert to just above the steamer bottom. Then I put a smaller pot inside the steaming insert (see picture). I poured out the washed, trimmed rose hips into the small pot and then added the oils. I let the water in the pot come to a boil, then reduced it to a gentle simmer. After putting the small pot inside the larger pot, I used a meat thermometer to periodically monitor the temperature of the oil infusion. I let the rose hips infuse for four to five hours, then strained the oil through cheesecloth over a fine metal mesh strainer. For a more purified oil, you can use fine muslin cloth instead of cheesecloth.

I have heard of people using a slow cooker or even a yogurt maker for infusing oils, but I prefer to have a dedicated pot just for infusing oils and leave my other kitchen appliances for cooking food.

If you give this a try, please let me know how it went in the comments. I will post the instructions I follow for using infused oils to make basics salves in an upcoming blog post. Note that if you are not able to obtain fresh rose hips, you can use dried, but you do not need to do a hot infusion. Use the same ratio of oil to hips, and let it infuse in a mason jar for a few weeks in a dark cool place before straining.

Homemade dish detergent is easier than I thought. I wanted to find a simple DIY recipe that used very few ingredients and would be environmentally friendly while still doing a great job of cleaning. If you’re already into eco-friendly, natural home cleaning, you may already have the ingredients for this in your cupboards. I’m sharing this recipe with you, in the hopes that you can save money, reduce harm to the environment, and make fewer trips to the store. I’ve been using this since 2019 and love how easy it is.

The three basic ingredients are washing soda, citric acid and vinegar. I buy a large box of washing soda about twice a year for $6-8 a box, and a large bag of citric acid sells for $11 on Amazon. I have also recently noticed it in the laundry and cleaning products aisle of grocery stores. I buy large jugs of white vinegar wherever I see it on sale, as it is my most commonly used household cleaning product.

Washing soda is sodium carbonate and has a high pH (alkaline), so it is best to keep it out of reach of children and avoid prolonged contact with the skin. It is rated as safe by the EPA and FDA. For more safety information click here. You can make your own washing soda by heating baking soda in your oven, but unless you are on a very tight budget, I recommend saving yourself some time and just buying it from the hardware or grocery store. Here in Canada, I buy it at Safeway or Canadian Tire.

Citric Acid occurs naturally in all citrus fruits (and some other fruits like strawberries and pineapple), but the citric acid you buy is typically synthetically manufactured. You can buy food grade citric acid that is safe to use as a food additive. It is one of the most common food additives and is typically used as a preservative or flavour enhancer. While it is rated for safe ingestion and handling, I find that it irritates my skin, so I always use gloves when handling it. It is great for cleaning soap scum and mineral scale, so it is my go-to product for cleaning the bathtub and sinks. This also makes it ideal for adding to the washing soda to give the dish-washing powder a boost. If you are concerned about the safety or price of the citric acid, there is an easy, affordable alternative: unsweetened lemonade or other citrus-based juice crystals. Check the ingredient list carefully to make sure there is nothing unnecessary added to the juice crystals like colour or artificial flavour. You could also use watered down lemon juice, but unless you have an excess of lemons and nothing better to do with them, that would not be very cost-effective.

This post contains affiliate links, which means I receive a small commission, at no extra cost to you, if you make a purchase using the link. 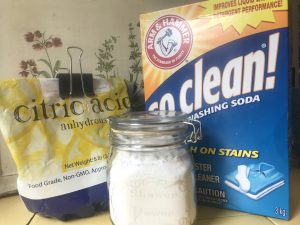 Fill a quart-size or litre jar with washing soda, leaving about 2 inches of space on top. Add 4 tbsp of citric acid and stir or shake the jar. I recommend Ball or Bernardin plastic lids if you don’t want to use your metal canning lids. I have started storing mine in a quart-size glass storage container with rubber seal (pictured above). The wide mouth makes it easier to scoop out.

Fill your dishwasher’s detergent container, close it, and you’re almost ready to go. The final ingredient, vinegar, gets added to the bottom of your washer and will help keep your glass dishes spot-free, as well as acting as a disinfectant. I use about a half cup but I honestly don’t bother measuring how much I splash in anymore. It is not a necessary ingredient if you are on a budget and don’t mind a few spots. The washing soda and heat of the water is sufficient to clean and sanitize your dishes.

We are a two-person household, and typically fill and run the dishwasher once a week. When we have family visiting, this can increase to up to 4 times a week, but even with annual month-long family visits in the summer, I only need to buy the washing soda twice a year. I go through citric acid and vinegar a bit faster, as I use both for general cleaning.

Some DIY dish-washing powder recipes also call for coarse salt and baking soda, but unless you find your dishes aren’t as clean and spotless as you want them, don’t bother with adding them. The citric acid softens the water much as the salt would, and baking soda is generally added to break down grease on dishes. I pre-rinse the majority of my dishes, so I don’t find that baking soda is necessary.

Let me know if you try this recipe and it works as well for you as it does for my household! We are on city water, so this recipe will likely need some tweaking if you are on well water that contains more minerals. Remember that you can add a cup coarse salt or Epsom salt to the detergent if your water is especially hard.

I ran out of citric acid and tried using just washing soda and vinegar. The dishes still came clean, but some of my glassware had a cloudy film. I had to then rinse them by hand. After I added citric acid back in this week, there is no more film, so it is an essential ingredient.